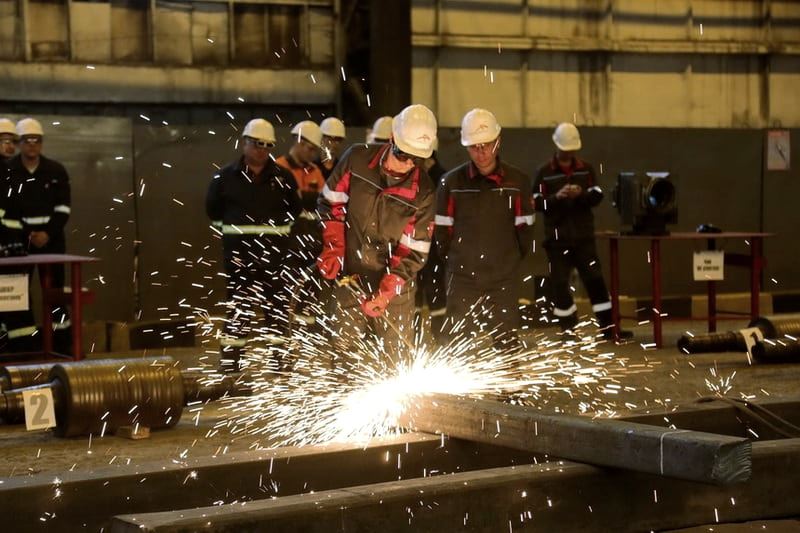 In the PJSC “Arcelormittal Kryvyi Rih” the 9th international competition of rollers was held dedicated to honored metal maker of Ukraine Ion Theodorovich Rotaru. This year three teams participated in competition, two of which represented “Arcelormittal KR”, “Sortovik” is a team, represented by the rolling shop No.1, 2,3, “Blumingovets” and a guest team from metallurgical plant “Azovstal”.

Each of the teams, who took part in the competition, consisted of three representatives of this sphere of activity: a rolling mill representative, a control room operator and the master o9f the main production site. Traditionally, the competition consisted of two parts – theoretical and practical. In the first part the participants from each team had to answer 40 questions of tests on technology of rolling production, labor safety and fire safety. The testing took place in the computer class of the training centre of safe execution of works at “Arcelormittal KR”.

In the second part of the competition, rollers and masters of the main production sites defined geometric sizes of samples of products as quickly and accurately as possible. Control room operators calculated the diameter of the rolls and rolling parameters. Rollers and masters competed in their skills of assembling and dissembling of bearings of liquid friction of roller support, adjusting bars and the stand.

As a result of all the stages of competition, the team “Blumingovets” of PJSC became the winner with the score 90.3 points. The second prize was won by the team “Azovstal” with the result of 83.9. And “Sortovik”, with their 81 points took the 3d one in the contest.